View Profile
Sachin Yardi, the writer who made us laugh our hearts out in each of his films like Kya Kool Hain Hum and Traffic Signal, has now put on the director's hat. He is debuting with a film titled C Kkompany. If he can make us laugh by writing a film, think what he can do as 'the captain of the ship'. Sachin Yardi took time off his busy schedule and briefed us about his forthcoming film, C Kkompany…

Q. After scripting films like Kya Kool Hain Hum and Traffic Signal, you are directing Ekta Kapoor's film, C Kkompany. How do you feel playing this new role?
A. I have also written this film. I have a very long association with Balaji so I find a terrific comfort level in working with them. I couldn't have had a better producer. Seriously, it was fabulous, it's like giving birth to a baby as I have been working on it for nine months and the film is releasing in June.

Q. We have heard that the film was previously named as D Company?
A. No, not at all.

Q. Are you more comfortable in writing or in directi 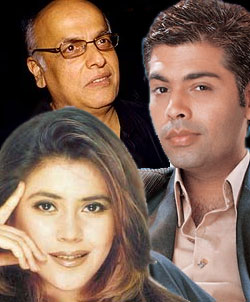 Featured Video
ng a film?
A. I am comfortable doing both. Actually that's what I realise now. There is some loss of communication when you are writing and somebody else is directing. Since I am writing, I think, I know better how it should appear on the screen. I wanted to direct my own films but you know the canvas is much bigger. It's not like a 30 seconds commercial. It's a two hour film. I thought the best way would be to write and see how other directors execute what you have written and one can learn from that also. In both the films I attended their shooting, editing as well as dubbing and hence I got a fair idea of how things work.

Q. Did you want to be a writer or director?
A. Both actually, I mean the idea was to make my own film eventually. So, I am kind of getting into it now. It feels good. Nothing more is fulfilling than doing both.

Q. Ekta is also acting in this film. What would be her character?
A. She has got a guest appearance in the film. She is playing Ekta Kapoor herself.

Q. How is she as an actress?
A. We haven't shot with her as yet, so that's one thing that is left. She has a proper scene.

Q. Please let us have little detail about the film.
A. The film is primarily about three underdogs who stay in a very typical middle class kind of a society. It's about the incidents that take place in their lives which take them from a 280 sq.ft house to attain the talk of the nation.

Q. What is the cast like?
A. The cast includes Tusshar Kapoor, Rajpal Yadav, Anupam Kher, Mithunda and Raima Sen. Mahesh Bhatt, Ekta Kapoor and Karan Johar will appear as guests in the film, though acting as themselves only.

Q. So far you have written comedy films only. When will we see you writing serious films?
A. I don't think I will write serious films. I get a lot of joy when people laugh watching films written by me. There is no 'high' better than that. I will stick to comedy films.

Q. According to our source, you weren't happy with the way your Traffic Signal script was presented on the screen by Madhur Bhandarkar?
A. No, not at all, I was quite happy. It was a very difficult film to execute at the writing level as well as the direction level. I think we tried our best. It's not a matter of not being happy because sometimes you see your own product and your kind of reflection on it and you say that it could have been better. It was not like I was critical about the film but we all jointly felt that it could have been better. But I was happy the way it was presented.

Q. Long back, you had started to script Kya Kool…part 2. How would you like to describe the reason of such late start?
A. It's delayed because I started my own film, C Kkompany, which I was writing and directing, too. So, it was difficult for me to concentrate on Kya Kool Hain Hum part 2. But the storyline is ready and I think things will fall into place by the end of this year.

Q. You scripted Traffic Signal and acted in the film, too. Are you trying to be Subhash Ghai?
A. No, actually I was narrating that particular role of the eve teaser in Traffic Signal to Madhur Bhandarkar. He was so impressed with the flavour I used in narration that he asked me to portray the role onscreen. Madhur has a habit of making lots of people from his unit act in his films.

Q. What other projects are you working on?
A. None really. I am just waiting for the fate of the film now. It's like my first baby. Right now I am in a state of eight months pregnancy. I hope everyone says it is a good looking boy or girl. The film is very close to my heart. There are lot of offers and works in hand but because of the absence of the required frame of mind I have not started on any of them. The film is at the final stage with a song being picturised currently and couple of scenes yet to be shot, so I am just concentrating on this film for the time being.