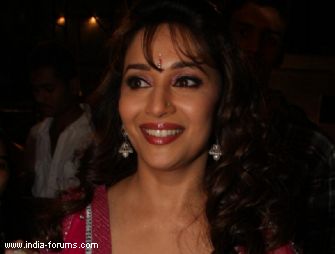 "Madame Tussauds unveiling on March 7, 2012. See you then," tweeted Madhuri, who has moved here from Denver to play a new innings in Bollywood.

Known for her natural acting talent and graceful dancing, the 44-year-old is the latest Indian film star to join the A-list line up at the Madame Tussauds wax museum, which also houses statues of Shah Rukh Khan, Aishwarya Rai, Hrithik Roshan, Salman Khan and Amitabh Bachchan.

Madhuri's wax statue has reportedly cost 150,000 pounds and it was completed in four months by a team of sculptors and experts in hair, makeup and wardrobe.

After playing a successful long innings and reigning filmdom, she bowed out of Bollywood in 2002 when she married US-based doctor Shriram Madhav Nene. Post-marriage, the actress moved to Denver and got busy with her husband and later two sons.

After marriage, her only release was "Aaja Nachle", but it didn't do well at the box office, however, the dancing queen struck the right chord with her fans when she appeared on the small screen as the judge of dance reality show "Jhalak Dikkhla Jaa 5".

She is currently working on her official website and plans to launch it soon.