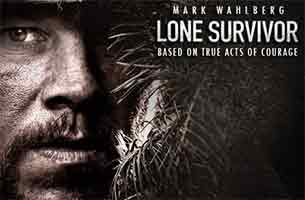 Mark Wahlberg-starrer "Lone Survivor", based on a true story of the United States Navy's Sea, Air, Land Teams, will release in India Feb 7.

The war movie, directed by Peter Berg of "Hancock" fame, will be released here by PVR Pictures.

Wahlberg plays Marcus Luttrell, an American Navy SEAL who was the lone survivor of the failed mission Operation Red Wings in Afghanistan.

Also starring Eric Bana and Yousuf Azamim, the movie is based on the book of the same name written by the real Marcus Lutrell himself.

The story, visuals and battle sequences in the film have received positive reviews as the film saw a limited release Dec 27, 2013 in the US.

The response in India is expected to be positive too.

"A war film is the most inspiring genre of cinema and considering it's based on a true story of survival and grit, 'Lone Survivor' explores a brilliantly shot struggle and battle," Deepak Sharma, chief operating officer, PVR Pictures Ltd, said in a statement.

"As an audience, the film will catch one's attention at both an emotional as well as intrigue level. We're excited about the release of this film as it depicts true heroism and is a story we believe deserves to be heard and seen by people in India," Sharma added.

"Miss Those Times": Jacqueline Fernandez on the Anniversary of her Two ...

Nawazuddin Siddiqui Waited 20 Years to Work with Sudhir ...
15 minutes ago

Rakul Preet Singh confesses to being a part of drug chats ...
45 minutes ago