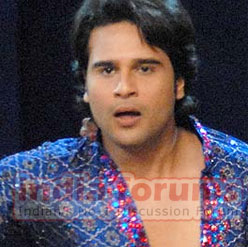 Bhojpuri films are big these days, and everybody who knows anything about Indian cinema will agree. South sizzler Nagma, and the eternal angry young man, Amitabh Bachchan, have also been a part of these films. With so many Bollywood stars willingly endorsing in Bhojpuri movies, the industry is progressing very fast. Many actors unabashedly imitate Amitabh Bachchan and Shah Rukh Khan, in fact, many join movies with aspirations to become as big as them.

And one of those aspirant actors is none other than Krushna, Govinda's nephew. He debuted in 'Aamdani Aththani Kharcha Rupaiyya', and is now considered one of the better known actors in Bhojpuri cinema. Like his uncle, he has enacted Bhojpuri roles with ease, and has managed to shine in them.

Despite the reign of stars like SRK, Salman Khan and Akshay Kumar, Govinda had managed to carve out a niche audience for his antics. We wonder if Krushna will be able to make it big, in spite of the presence of some bigwigs like Ravi Kissen and Manoj Tiwari, in Bhojpuri cinema.