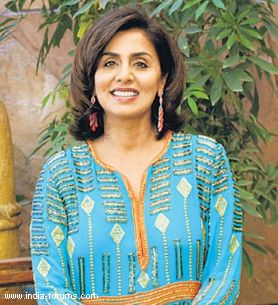 Veteran actress Neetu Singh is thrilled that her nephew Armaan Jain's debut film is named "Lekar Hum Deewana Dil", which is a line from her popular song from the film "Yaadon Ki Baraat".

Neetu featured in the R.D. Burman song in the 1973 film wearing a red dress. It went on to become a chartbuster in those times, and hence, it holds a special place in her heart.

"This song holds a very special place in my heart," Neetu, wife of Rishi Kapoor, said in a statement.

"When I learnt that Armaan's film was titled 'Lekar Hum Deewana Dil' I was super excited, I also shared my feelings with Armaan's mother on the title of the film," added the actress.

Besides the new film's title, what Neetu is more excited about is the fact that her nephew will be debuting with this movie and hence feels she has a personal and professional connect with it.

"Lekar Hum Deewana Dil" is a story about youths and how they grow up while making mistakes.

Co-produced by Eros International and Illuminati Films, the film is directed by Arif Ali and is scheduled to release July 4.