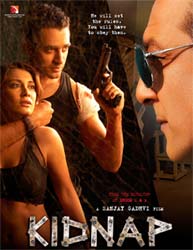 Following the success of Jab We Met, Welcome and Singh is Kinng, Indian Films - Studio 18 has released Kidnap on DVD for the audience in the UK, North America & Canada, UAE and other international countries.


The DVD package is slick and stylish. The thematic outer jacket has an intriguing look, in line with the feel and genre of the film. This fine disc of visual wonder additionally carries a 22-minute making of the film and the video of the hit Mit Jaaye remix.