Savita Raj Hiremath, producer of the National Award winning film 'Khosla Ka Ghosla', is set to make a sequel of the satirical comedy and says it was always at the back of her mind.

'Khosla 2' was always in mind, but we didn't announce it. We were waiting for the right story idea and now that we have it, we can carry forward the brand,' Hiremath, who comes from an advertising background, told IANS on phone from Mumbai.

Not revealing much about the cast and director, Hiremath said: 'We have short-listed a few names. Working on the project has become such a challenge for us. So many actors and directors have shown interest in working on the film.' 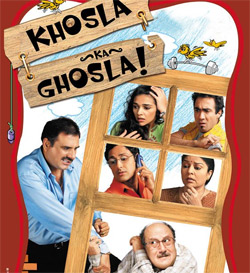 'We are sure about it,' she said about making the sequel.

However, Hiremath's priority is a remake of the original in different Indian languages before the sequel goes on the floors.

'A remake of the original movie has already been done in Tamil by UTV and is ready for release. We'll cover other languages side by side before the sequel,' she said.

For the viewers, part two of 'Khosla Ka Ghosla' promises something fresh and new which like the first movie will focus on another middle-class problem.

In the original, a fraud property dealer swindled money from a middle class family. While Anupam Kher played the head of the family, Boman Irani featured as the villainous estate agent. Parveen Dabbas, Tara Sharma and Navin Nischol too played important roles.

When asked whether she would include an item number - as is the craze in the industry - in the sequel, Hiremath said: ' 'Dunia uth patanga' from 'Khosla...' has already become an item number. The song is played in discotheques for at least two minutes. It is the biggest item number till date.'

In fact Hiremath might even redo the song for the sequel as she feels 'it defines the crux of life.'

Hiremath claims to have started a new trend of content driven films in the country with 'Khosla Ka Ghosla' and is determined to stick to it.

'For me, the movie is content driven, I will not overspend on the movie; it has to make business sense.'