After successfully thrilling your senses with gorgeous beauties, dangerous stunts and a dashing Akshay Kumar, Fear Factor – Khatron Ke Khiladi is back with – literally – a bigger bang! 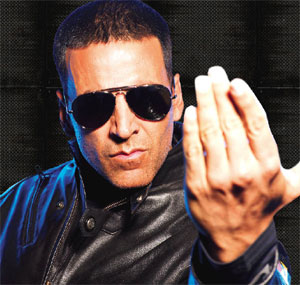 Featured Video
Khatron Ke Khiladi Level 2 that begins on 'COLORS' later this year has every intention of taking you on a roller coaster ride of extreme stunts, galloping emotions and never before seen action on Indian television. This time, the show is looking for you, the viewers, who have it in them to accompany Akshay and his sultry sena on this mind boggling adventure. Those of you with an ability to perform under pressure and love and passion for adventure will be chosen through auditions that will be held all over the country later this year. To register log on to www.colorstv.in/micro/kkk2, last day to receive the completed registration form is 15th February, 2009.

Speaking about the return of this action extravaganza, Ashvini Yardi, Programming Head, 'COLORS' said, "Fear Factor – Khatron Ke Khiladi Level 2 is going to be a notch higher in terms of bigger celebrity participants than the last season, the difficulty level of challenges and even Akshay Kumar! The inclusion of the common man as a co-contender will definitely create a lot of excitement. This time around, the show plans to pack in a bigger punch to make sure everyone joins in on the excitement. Also, Akshay will be playing a much bigger role than just of a mentor and a host - something definitely to watch out for!"

The action will begin in February when auditions will be held across the country for viewers who would like to participate in the show. Auditions will be held in Mumbai, Delhi, Kolkata, Lucknow & Ahmedabad. COLORS will soon be revealing the names of celebrity participants on the show in a formal announcement in the next few months.

Khatron Ke Khiladi Level 2 will be produced once again by format owners, Endemol India. Deepak Dhar, Managing Director, Endemol India says, "Expect complete fireworks this season because we've raised the bar across the board.  Khatron Ke Khiladi Level 2 is a double dose of everything from action to stunts and from the contestants to Khiladi Kumar himself.  Apart from all the action on screen, a few lucky viewers will get to experience the exhilaration of the show first-hand.  Fasten your seat belts… the action is about to begin"

Fear Factor – Khatron Ke Khiladi debuted in July 2008 as one of the first shows on the then newly launched channel COLORS.

So are you ready for Season 2 with your favorite Akshay Kumar??

13 years ago yahhhhhh i am much excitted for the show

+ 2
13 years ago This show was too good,loved season 1 and am really lookn fwd for season 2 and wonder who will be the celebs this time and idea of getting common man also is awsome.