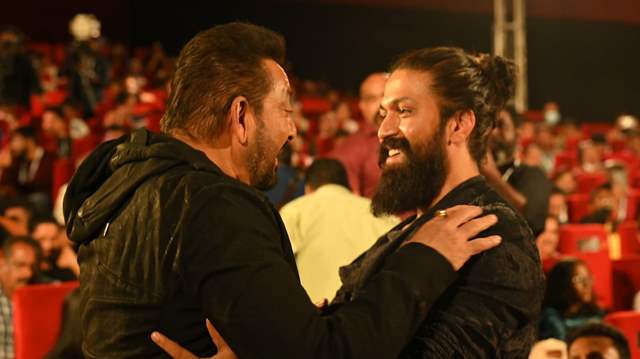 On 27th March, the grand trailer launch of the pan-Indian film KGF Chapter 2 took place in Bengaluru. The who's who of the south industry were present at the event along with the whole cast and crew of the film.

The grand event was hosted by none other than Karan Johar and it was a humongous event. The stars of the film Yash, Srinidhi, Sanjay Dutt, Raveena Tandon, director Prashant Neel, and all the producers of the film graced the occasion.

The trailer was launched in 5 languages including Hindi, Tamil, Telugu, Kannada and Malayalam.

The Hindi version of the film is being presented by Excel Entertainment. Ritesh Sidhwani was present at the event as she gave a speech of honour and thanked all the cast members.

Raveena Tandon, Yash, Sanjay Dutt also took to the dice and delivered their gratitude speeches by acknowledging each and every member important to the film.

During the press discussion session, Yash was asked that does he think the gap between bollywood and south cinema is getting bridged, to which he responded,

"There is no wood now, it's all part of the Indian cinema and we all are working towards the same goal which is entertaining the audience".

Sanjay Dutt also discussed about his journey of battling cancer and shooting for this film with great zeal and fervour.

The trailer looked promising. It was an high-octane action packed clip filled with drama, emotions, politics and power.

The film, KGF Chapter 1 had already created a hype and buzz amongst the fans and not only the South audiences but the whole of India accepted it and hailed the performance of the actors. They are expecting the same from this much awaited film and it is definitely going to give the audience an edge of the seat experience with its dramatic plot twists.

The film is all set to hit the theatres on the 14th of April.