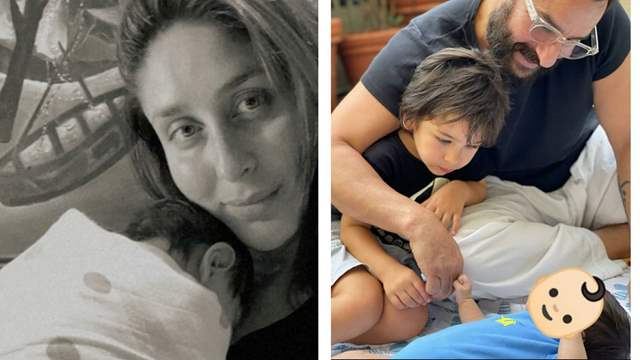 Kareena Kapoor Khan and husband Saif Ali Khan welcomed their second baby, a baby boy, on February 23, 2021. While fans have been waiting get a glimpse of the newborn baby, Bebo has been giving us a sneak peek of the little Pataudi.

On Friday, Kareena lit up the weekend as she shared a picture of her newborn son with daddy Saif and brother Taimur Ali Khan. She captioned it as, “This is what my weekend looks like... how about you guys?”

In the adorable picture, the three boys seem to be spending their weekend in the backyard of their house. Daddy Saif and baby Taimur can be seen gazing at the newborn with love. However, Kareena added a baby emoji on her second son’s face.

As soon as Bebo dropped the picture on her Instagram handle, fans went berserk and commented with red hearts under the post.

Earlier this month, Kareena’s father and actor Randhir Kapoor had caused a storm on the Internet after he posted a baby picture and then deleted it.

Fans were quick to assume that it was the picture of Saif and Kareena’s newborn baby. While the picture had gone viral on the Internet, the Pataudis have not commented on the same yet.

26 days ago We can see the same on kareena's instagram page. There is no need to create special article about how kareena is spending her weekend. Please improve the standard of journalism and write some informative article about tv world. Kareena ka weekend kaisa tha aise articles likhne ke india forums ke dinn aa gaye hai :(