Bollywood star Saif Ali Khan, who has turned producer with his forthcoming film 'Love Aaj Kal', says it was Kareena Kapoor who recommended Imtiaz Ali as director for his first production venture. 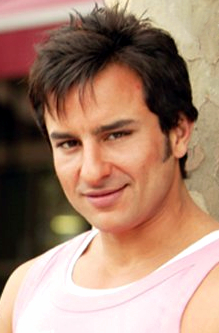 Featured Video
Kareena had worked with Ali in the successful romantic comedy 'Jab We Met'.


'Kareena highly recommended Imtiaz when I decided to produce a film. At that time 'Jab We Met' hadn't released. So I met him... it was the script and the way he narrated it to me that really impressed me and we decided to make 'Love aaj Kal',' Saif told reporters here.


'I love the way Imtiaz works. He is amazing,' he added.


Saif was in the capital Thursday with his co-star Deepika Padukone and Ali to promote the film that is scheduled for July 31 release.


The film also stars yesteryear hit couple Neetu Singh and Rishi Kapoor along with Rahul Khanna and focuses on relationships in two different eras, showing that the experience of being in love remains the same.


Asked why he decided to venture into production, the 38-year-old said: 'I decided to turn producer because I wanted to own the work that is done. I wanted to be more creatively involved in a project apart from just acting in it and take the responsibility. Basically, after working in the industry for so many years, I wanted growth.'


So did he change in anyway after taking this step?


'Yes, I have become more conscious of small things now after becoming a producer - I became more conscious about small details during shootings like whether an artist is coming on time or not, production plans are working in close coordination with other, et al,' Saif said.


The actor, who is co-producing the film with Dinesh Vijan under their banner Illuminati Films, says it is an unconventional move and will appeal to viewers.


'Love Aaj Kal' will appeal to people since it has got very genuine dialogues. It has a certain newness and boldness in character. It is unconventional, yet very commercial,' he said.