View Profile
It's heartening to see actors taking a personal interest in the well-being and promotion of their films..... Kareena Kapoor is surely going down the illustrious Aamir Khan route in ensuring that Golmaal Returns, her first release after Jab We Met, does not fall short of creating the magic it promises to create at the Diwali box office. 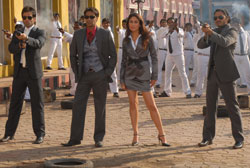 According to industry sources, even while shooting for Kambakth Ishq in Venice with Akshay Kumar, Kareena was in regular touch with the film's producers on the promotion of Golmaal Returns, which, in her opinion, is an out-and-out commercial family entertainer.

In fact, Kareena was very keen to have Pritam (her Jab We Met music director) compose the score of Golmaal Returns, which she voiced to the producers at the very outset. She even took an incredible amount of interest in listening to the songs after their recording and voicing her opinion. The result was a chartbusting soundtrack, including her Tu Saala Kaam Se Gaya number, which has become an overnight hit.

Upon her return to Mumbai from Venice on the 15th of the month, Kareena is said to have made herself available for the publicity of Golmaal Returns.

We're confident that her passion and sincerity will pay off when this keenly anticipated mega-comedy hits the cinemas on Wednesday, 29th October.

It is an Indian Films - Studio 18 worldwide release.