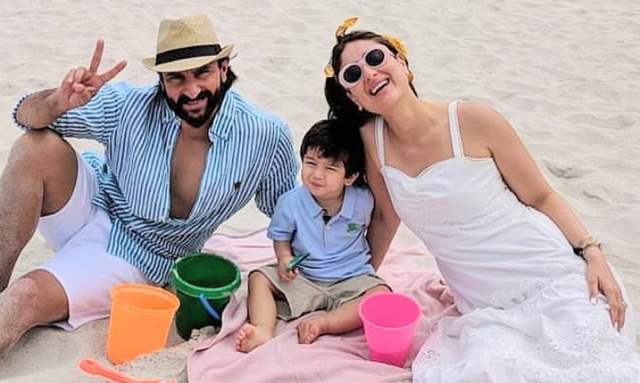 Kareena Kapoor Khan is finally back to work and she recently shared a glimpse of her exciting and fun-filled first look of the upcoming celebrity cooking show - 'Star Vs Food' which is all set to premiere on discovery+.

But before the fans could see her culinary skills, the actor spilled the beans about her epic moments with Saif Ali Khan and their son Taimur Ali Khan and shared that they are the ones who truly enjoy being in the kitchen.

In a promotional interview for the show, the Laal Singh Chadha actress revealed that Saif and Taimur enjoy being in the kitchen whereas she's tasked to provide music. She also opened up about her pregnancy cravings.

"Taimur and Saif love it; they love being in the kitchen and I am kind of in charge of the music. They like to listen to nice jazz music,” she said, as reported by Times Now.

As reported earlier, Taimur was previously seen filling small molds with melted chocolate as Kareena and Saif sitting at a table, observed his skill. Without a doubt, the little munchkin enjoys cooking.

Meanwhile, speaking of Saif’s love for cooking, Kareena also added that while the world was busy baking banana bread, Saif was hosting his own experiments in the kitchen.

"I think during the lockdown, everyone was kind of making banana bread, I didn't make banana bread, but Saif was really experimenting with a lot of food", she was quoted in Times Now report.

Kareena further mentioned that when she was pregnant with her second child last year, she was craving Italian food. She also summerised the vibe in the house when the family sits down for a meal.

So, basically like through the pregnancy, I had, it was just like a constant craving for pizzas and pastas. It was just weird throughout, both my boys.

She continued, “Every time we sit at a table, I feel like we are one of those old Italian family, we are screaming. We are eating, drinking, laughing because food is something that should bring joy to you."

While shooting for the celebrity cooking show that will go live on DiscoveryPlus on April 15, Kareena will be seen getting in a candid conversation with her friends Tanya Ghavri and others on the show.

Kareena was asked the three things she takes to her bed. Kareena wittily replied,

While the trailer of 'Star Vs Food' has finally piqued the audience’s interest, everyone is eager to see Bebo’s skills who was seen grating cheese. It has been revealed that the actor will be baking a pizza on the show.

The show will feature Kareena Kapoor Khan, Karan Johar, Arjun Kapoor, Malaika Arora, Pratik Gandhi show off their cooking skills in the upcoming that is all set to drop this month on April 15.