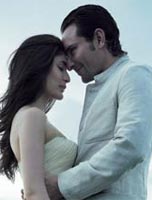 Kareena Kapoor is extremely eager about 'Qurbaan' as it is her subsequent motion picture with current beau, Saif Ali Khan after 'Tashan'. She was enthusiastic to do 'Love Aaj Kal' with him but unfortunately the actress could not. Now that Saif has snatched her for his next production, she is stoked for her much awaited love making scene between the two. In a previous interview, Bebo bared everything saying that this Rensil D'Silva's directed movie is very exceptional to her. About the hot scene, Bebo stated she does not have any problems with it as the script demands it.
Kareena is also jam-packed with praises for her ex Shahid Kapur and felt pleased that Shahid is accomplishing great things in his career. She also confirmed that Saif and her loved 'Kaminey and even congratulated Shahid themselves. She continued praising Vishal for making such a wonderful film and finished by thanking the viewers for giving a positive response to such a unusual film like 'Kaminey'.
Featured Video