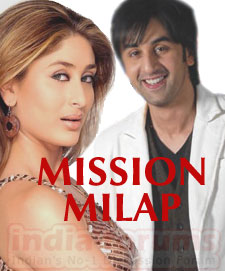 The clash between the two Kapoor Khandans has been in the news for a very long time. The two camps with Babita and her daughters on one side and the rest of the Kapoors on the other is what we’ve seen. The times are changing and so is their relationship with the next generation taking up the task to reconcile the differences amongst them.

What I mean from next generation are “Kareena Kapoor” and “Ranbir Kapoor” coming out in public and supporting their work.

Kareena was seen in the premiere of Saawariya and went gaga over how stunning her cousin Ranbir looked. Ranbir went a step ahead and commented on his “Bebo didi’s” flawless performance in “Jab We Met”.

Efforts made by both the Kapoor Kids are improving ties between the two families. Lately, at the premiere, Kareena insisted on sitting in the same row along with beau Saif Ali Khan with the entire Kapoor family to support Ranbir. They were seen exchanging words with her family members. Lastly she made an exit saying “We Kapoors are here to rock”!