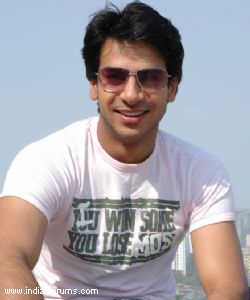 A freshly churned news out of our hot pot tells us about Karan Mehra who was last seen on Star Plus' Behenein and Sony TV's Surya the Super Cop. Apparently, the actor has been zeroed on to play the role of a boxer in Creative Eye's new show which will be aired on Star Plus.

Karan Wahi and Reema Worah were already finalized as the main leads and now Karan Mehra is the latest addition to the cast.

A little birdie informs, "The pilot shoot for the show is going on where Karan Wahi, Reema Worah and Karan Mehra are shooting."

Talking about Karan Mehra's character the source states, "Karan will play Vicky who is a boxer with a strong political background as his father is a Minister. Vicky is a hard core negative guy and will be the strongest competitor of the character essayed by Karan Wahi."

Karan Mehra confirms but refuses to divulge any information."I will be doing a show with Dheeraj Kumar but I can't reveal anything more on the same," he says.

The production and channel have two titles in mind- Pyaar Nibhayenge Hum and Mein Tulsi Tere Angan Kii. However, one of them still needs to be picked.


Keep watching this space for more details on the same…

princessRock776 6 years ago why this show never went on air?? what happened? have they decided a name or not?

sidmafan 8 years ago Karan wahi u r the best.Can't wait for the show to air

Can't wait for the show to air :D

hrkw.fan 8 years ago Love u Karan Wahi
Can't wait to see u back onscreen :)

monalobo 8 years ago love you a lot Karan...waiting anxiously for the show to be aired.