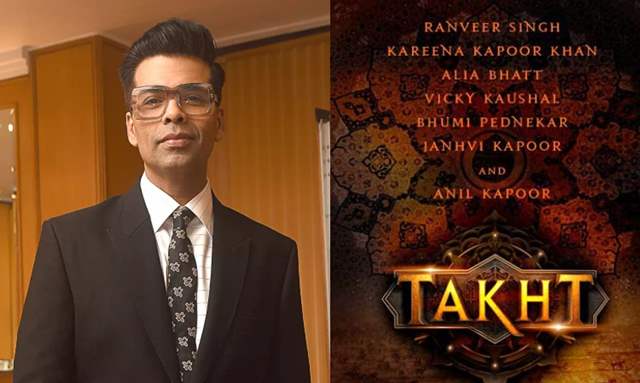 Karan Johar’s multi-starrer and magnum opus - Takht is touted to be one of the most awaited films. Earlier, several reports hinted at the dream project was put on hold owing to the coronavirus pandemic. Now, in a recent turn of events, a report suggests that the film might never make it to the theatres as it has been permanently shelved.

The film boasts an ultimate ensemble cast like Ranveer Singh, Kareena Kapoor Khan, Alia Bhatt, Bhumi Pednekar, Vicky Kaushal, Janhvi Kapoor and Anil Kapoor. The film was announced in 2019 and since then it has been in the news for being shelved.

A recent BollywoodLife report quoted a source close to the development and informed that the film has been shelved due to the creative differences.

“Karan Johar’s ambitious project Takht has been shelved permanently. It was put on hold due to COVID-19 earlier. However, the team developing it have been having a hard time sort their creative differences and be on the same page,” the source told BollywoodLife.

The source added, “While Takht may not be happening, Karan Johar has been working on a love story for which he is considering Ranveer Singh and Alia Bhatt as the leads.”

The report further mentioned that the Ae Dil Hai Mushkil director has been working on the script all through the lockdown. Ranveer and Alia recently heard the script and they have given a verbal nod as they loved the film.

It is also being speculated that the new film is said to be a love story with a fun vibe as Johar wants to step away from his intense zone and go back to something along the lines of his debut film, Kuch Kuch Hota Hai.