Everyone is aware of the kind of dostana Karan Johar and soap queen Ekta Kapoor share. 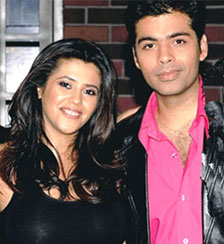 Featured Video
The other thing the duo is known for is their love towards ‘K’ factor as their each and every project starts with this magical alphabet. But after seeing Ekta giving up the ‘K’ factor with her upcoming release C Kkompany, it seems Karan too has been inspired to experiment without this alphabet.

Karan’s first attempt to do away with the 'K' was when he wrote the story of My Name is Khan, although we do see that he still retains the alphabet, albeit in the middle.

Dostana would be his first attempt to do away with it completely. The film will star Abhisekh Bachchan, John Abraham, Bobby Deol and Priyanka Chopra and is going to be directed by Tarun Mansukhani who has earlier directed animation for Kuch Kuch Hota Hai.

Well, looking at the star-cast, even ‘S’ factor seems to be missing with Karan’s buddy Shahrukh Khan’s name not visible in it. We would have to wait and see whether this experimentation would work in favour of Karan and Ekta.