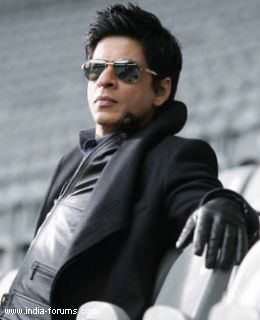 New Delhi, Oct 11 Shah Rukh Khan says he had approached his friends Karan Johar and Aditya Chopra to direct his mega-budget 'RA.One' but they chickened out.

'I went to all directors to make this film ('Ra.One') and even my own friends like Karan or Aditya. They all are 'lallu' (idiots) I say. I wanted to do something more than a romantic comedy,' Shah Rukh told his friend, actress Preity Zinta on UTV Stars' 'Up Close and Personal with PZ'.

The 45-year-old, who plays a superhero in the film which is releasing Oct 26, is hoping for positive things for the project. It is directed by Anubhav Sinha.

'I have been informed that I am officially broke and 'Ra.One' has turned out to be one of the most expensive films. If this film does well, it will go down the history and will be remembered. I am glad I have bought something to India which has never been seen before... I am very inspired by 'Krish' and 'Drona',' he said.

'RA.One' also features Arjun Rampal and Kareena Kapoor, with a cameo by superstar Rajinikanth and a special voiceover by Amitabh Bachchan.

When Saba lost her long tresses!

'Mujhse Fraaandship Karoge' actress Saba Azad, who plays a strong girl in the movie, isn't as strong in real life. The youngster shed a bucket full of tears when her hair was required to be cut for the role.

The actress had knee-length hair originally and the role demanded her to cut them. She was petrified when she heard about it and began crying when her locks were being chopped, said a source from production house Yash Raj Films.

But when she opened her eyes, she was pleasantly surprised and was really happy with her makeover.

The movie will release Friday.

Deepika Padukone, who is in a rumoured relationship with Siddharth Mallya, turned down the marriage proposal of one of her craziest fans.

Varun Raj, a 21-year-old rich brat from Dehradun, will feature on the upcoming episode of UTV Stars' 'Live My Life'. He claimed that if he proposed to Deepika, there was no way she could refuse.

But much to his dismay, the 25-year-old actress thought his age was an issue!

The TV show gives a chance to one lucky fan to live the life of his or her favourite Bollywood actor for a day. The episode featuring Deepika and Varun will be on air Saturday.