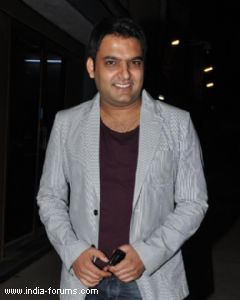 Stand-up comedian Kapil Sharma has urged his fans and friends to support the 'Free Sunder', a campaign launched by PETA to free a 14-year-old elephant named Sunder, who is chained and kept in a temple in Kolhapur.

"Are you aware that a young baby elephant Sunder is held captive in Kolhapur by his owner. He is chained, beaten and is starving. Very sad," Kapil tweeted on Sunday.

PETA (People for the Ethical Treatment of Animals) conducted an undercover investigation in December 2013, which showed Sunder as being chained in two legs.

A video posted online shows Sunder's body with visible signs of abuse and a severe injury to his right eye.

PETA has now moved the petition to Bombay High Court after orders by the Maharashtra Forest Department to release Sunder into a sanctuary were not followed.

"The court hearing is on January 28. I am praying for his freedom. All my friends, please support this cause Free Sunder," Kapil later tweeted.

Bollywood actor Arjun Rampal even wrote a letter to Maharashtra state Forests Minister Patangrao Kadam urging him to take immediate action to ensure that Sunder goes to a sanctuary from the Kolhapur temple.

He hand-delivered the letter to the minister January 20.

"En-route to meet the forest minister Dr. Kadam to Free Sunder, the elephant who is captive in a temple in Kolhapur. Fingers crossed," Arjun had tweeted on January 20.

The next day Arjun again took to the micro blogging website and posted a tweet with Sunder's picture: "Chained with spikes Sunder and considering we worship Lord Ganesha, this is how we treat elephants. Free Sunder."

_mahi_ 6 years ago I am glad that besides being a great comedian, Kapil is a caring person too

Hope everything gets good for Sunder

hanane 9 years ago I like Shahid/ Kareena's scene from Jab we met : )

Nadz_YuNalover 9 years ago marry me


it deserved to be sumwer on top bt its cool!

LimitLessFan 9 years ago Jenifer, its there in todays list

shivani003 9 years ago Nice selection! I like almost all of them! :)

There are many more I can think of.

Smileyface 9 years ago KKHH gazebo scene can't be in here...its from 98...but yeah it was an amazing scene =)