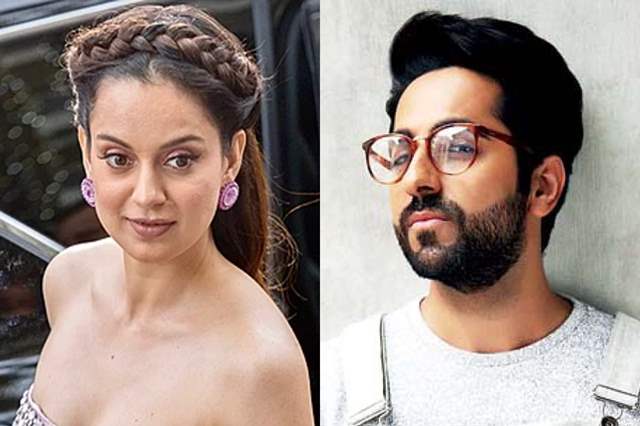 Kangana Ranaut manages to make her way back into one conversation or the other in ways one can rarely anticipate. In the on-going debate surrounding nepotism and all the larger conversation around actor Sushant Singh Rajput's demise and the person in question, Rhea Chakraborty, she has been constantly expressing her take on the various issues.

Now recently, actor Ayushmann Khurrana, who is an 'outsider' himself in its essence received backlash on social media for his comments where he apparently supported Rhea Chakraborty by leaving a heart and broken emoji on her post earlier. Recently, Kamaal R Khan posted and called out Khurrana for supporting Chakraborty and star kids, Ranaut's Twitter team reacted to it.

A few statements made by Khurrana on nepotism in an earlier interview resurfaced which had his saying that star kids who are successful, are genuinely talented. KRK said,  “Ayushman Khurana is supporting #RheaChakraborty and nepo kids for 3 reasons! 1) He has to survive in the Bollywood. 2) He is the artist of #YRF. 3) Sushant Singh was his competitor! Don’t worry khurana. Your films will also come n public will give you perfect reply. All the best.”

Reacting to this tweet by KRK, Kangana’s team tweeted, “Chaploos outsiders support mafia only for one reason and the reason is their mediocrity, nobody is threatened by them and they take full advantage of conflicts faced by few like Kangana and SSR by openly denying and mocking them .. –KR.” Take a look:

nikki.171 1 months ago Even though Kangana made sense in the past and may have truth to some of her words and stand.... she is beginning to sound insane and stupid now. It seems like she is the jealous one while milking the current hot topic to her advantage. She is appointing herself the judge, jury and executioner of not only nepotism controversy and of the career of other actors in the industry (Both insiders and outsiders) but also of SSR's death investigations. Its is honestly getting vile. She has lost credibility and now looks like the bully herself with some kind of campaign against anybody who has a different viewpoint than hers. She should reevaluate before she loses whatever she has.

Needblessings 1 months ago ok her new target ayushman. this evil, the toxic lady only knows to target famous hard-working, self-made celebs to stay in news. such a disgusting, vile woman.

Yami Gautam and Vikrant Massey collaborate for Mohsin ...
20 minutes ago

review
Review The Confession Review: The film Relieves all the Serial ...
41 minutes ago