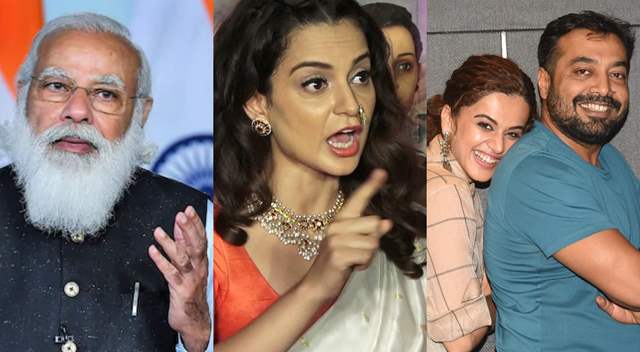 Kangana Ranaut made  statement on her official Twitter handle and took a dig at the celebs who faced the I-T raid. Without taking names, she shared a post on the micro-blogging site. The ‘Panga’ actress mentioned Prime Minister Narendra Modi in her tweet.

"Once a thief, always a thief. Those who want to sell their motherland and cut it into pieces are traitors. The people supporting such traitors are also thieves,” she wrote in Hindi.

Kangana Ranaut who has been vocal about her opinions on Twitter has reacted to the news in a series of tweets. She wrote, "They are not just #TaxChor huge transactions of black money has happened, did they get that money for provoking #Shaheenbagh riots or #republicdayviolence... From where the black money came and where did they send the black money which isn’t accounted for?"

Her next tweet read, "Kwan agency and Phantom production house were the prominent accused in #MeToo many rape allegations/ cases on them but Bullydawood protected them, people like Anurag Kashyap are not only rape accused but they also tried to justify Shushant’s death, who all think its divine justice."

Calling the celebs under investigations as Tax Chor, she tweeted, "Every minute the numbers are rising, this is only the money they found clues for, one can only imagine what could be the actual numbers of money laundering, have been exposing terrorism racket of tukde gang in the under belly of Bullydawood, these are terrorists not just #TaxChor"

She further mentioned, "Is it a coincidence that each and every stake holder of Phantom n Kwan has been accused by multiple woman of rape, molestation n harassment. If you don’t respect women,your very moral fibre is wrong, you are a born criminal ,industry killed #MeToo but look one can’t escape karma."