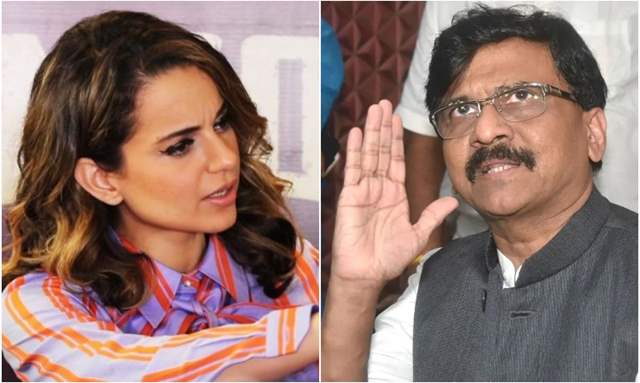 Kangana Ranaut and Shiv Sena leader Sanjay Raut have indulged in a social media brawl. The politician had slammed the actress in Shiv Sena's mouthpiece Saamana over her comments against Mumbai Police. Kangana hit back at his statement with a sharp reply.

Taking to Twitter, Kangana wrote: "Sanjay Raut Shiv Sena leader has given me an open threat and asked me not to come back to Mumbai, after Aazadi graffitis in Mumbai streets and now open threats, why Mumbai is feeling like Pakistan occupied Kashmir?"

Her response comes after Sanjay Raut took a dig against the actress in his column saying that her "treachery" was shameful as she criticised the Mumbai police despite living in the city. He had written, "We kindly request her not to come in Mumbai. This is nothing but insult to Mumbai police. The Home Ministry should take action over it.”

Previously, Kangana lashed out at the Mumbai Police for allegedly liking a derogatory tweet against her. she also shared a screenshot as she tweeted: “Liking derogatory tweets about people who are fighting against the murderers of Sushant, instead of condemning public teasing and bullying like this @CPMumbaiPolice is encouraging it, @MumbaiPolice has hit all time low ... SHAME!!”

Kangana has shared yet another tweet in which she has also tagged Prime Minister Narendra Modi. She writes, “When @CPMumbaiPolice is openly intimidating me like this, encouraging bullying and crime against me, will I be safe in Mumbai ? Who is responsible for my safety? @PMOIndia.”

Kangana Ranaut has constantly been voicing her opinions on Twitter over the Sushant Singh Rajput case and emerged as one of the most prominent voices while demanding justice for the late actor. She also raised questions at the drug nexus in Bollywood and stated that she will help the Narcotics Control Bureau to expose the big names.

Watch this video to know more: