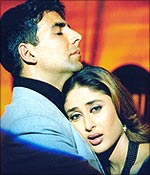 The much awaited Akshay Kumar-Kareena Kapoor starrer 'Kambakkht Ishq' will be unveiling its first look with the release of 'Aa Dekhen Zara' on March 27th, 2009.

Starring Akshay and Kareena, the movie directed by Sabbir Khan is scheduled for release this summer.

The movie is a romantic comedy which revolves around a debonair stuntman  (Akshay Kumar) who believes that 'women are only good for' and a firebrand model (Kareena Kapoor) who with her cutting edge wit and sardonic tongue can stare down any arrogant man.

Hitting the theatres soon, 'Kambakkht Ishq' promises to be an entertainer.