One sentence that comes into the mind after watching Kambakkht Ishq is … That was the actual keep-your-head-at-home-funny movie. This movie will make people think how mindlessly ridiculous a film can be.

Kambakkht Ishq is about gender quarrels, too many english swear words, loud music, awesome stunts, amazing locals, good-looking costumes and oh-my-God, your breath must be hold...Sylvester Stallone and Denise Richards. 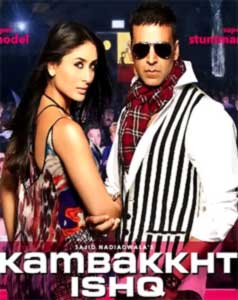 Akshay Kumar plays the role of a stuntman, named Viraj Shergill, who is commitment-phobic. Kareena Kapoor (as Simrita Rai aka Bebo) plays an almost-surgeon who models to pay for her med education. She is a female version of Akshay's character and is absolutely opposed to getting married. Life, although, takes a 360 degree turn for them and they fall in love even though it takes time for them to realize.

The story of the film is comical and absolutely ridiculously silly. The script is totally lame.

Who operates on a patient before the anesthesia starts to work? Who wears a designer watch which is hanging from the wrist while operating on the patient? And which intern-surgeon would be given the responsibility to operate without any senior or a resident???

In real life, the stuntmen are just simply stuntmen. They don't usually romance all the beautiful models and have lavish parties in a large posh house with swimming pool and huge stereo systems. And also have a driver-cum-assistant? Producers must be overpaying the stuntmen! Lucky them!!

And Denise Richards agreeing to marry an Indian stuntman? Oh my God… now the fatuousness goes way beyond anything sane! And Akshay being violated by the Afro-American customs lady officer … that was 3rd degree torture, not even practiced by the FBI I think! These are some of the mindless stuff you will come across.

Prescription: Leave your brains at home.

Akshay and Kareena dominated in the movie with good performances in whatever their characterizations had to offer. There are some ok-ok supporting performances by Vindoo Dara Singh, Rajesh Khera, Kirron Kher, and Boman Irani. Javed Jaffrey, who plays the money-minded Gujju in "the land of opportunities" is completely wasted. Aftab Shivdasani as the whiny lover and Amrita Arora as a brainless wife offer no spice at all.

The best, though, were Sylvester and Denise. They played their characters well and they were the real treat in the movie. Denise's performance was very good. Watch for her tearful eyes towards the end of the movie when she sends Viraj to Bebo. That was done with some heart!

The other treat to watch is the Universal Studios. Akshay was quite impressive in the stunts which of course are his forte. Kareena's dresses were another attraction. Her size-zero makes her look great in those flimsy outfits. Locations in LA (in the U.S.) and (in ) are used well. The hospital where Kareena (the surgeon) works had an uncanny similarity to the hospital set used in the American show "Grey's Anatomy".

The song-dance routines did not have anything new. The choreography was mechanical. Coming to the stunt choreography, the car chase towards the end of the movie looked totally Hollywood-Bourne-series inspired. The other stunts by Akshay were pretty daring.

So, what will you watch the movie for? If you like to have 2 plus hours of he-haw with no logic at all, go for it. If you are into real cinema with a good story/script and great performances, give this movie a miss and don't waste your money.

Bollycurry gives Kambakkht Ishq 1.5 red chillies out of 5 and predict that this movie will have a fine first week. Next week onwards… there will be no guarantee at all.