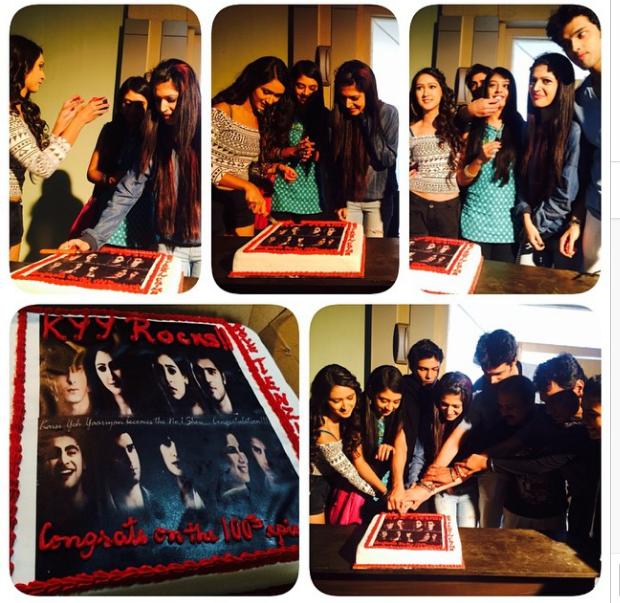 It's a double whammy for the cast and crew of Kaisi Yeh Yaariyan as the show earlier had acquired a top position on the TRP chart among the other youth based shows and now have achieved the success for completing 100 episodes.

The entire team cut a cake on the sets to commemorate the occasion.

We tried contacting Niti Taylor and Parth Samthaan who is seen as Nandini and Manik in the show but could not reach to them.

sashasingh24 6 years ago Congratulations to the entire team of KYY .. All ur hard work is paying off .. Thanks u for the amazing job u all do ..

6 years ago congrats to all the cast of Kaisi Yeh Yaariaan...u really rock the show...love u all...especially love u both Parth Samthaan n Niti Taylor as manik n nandini

6 years ago Congratulations to the Kaisi yeh Yaariaan team on giving the viewers the pleasure of watching the most wonderful and enjoyable 100 episodes . Here is looking forward to the next century of episodes.

Special appreciation and thanks to Parth Samthaan and Niti Taylor for making us look forward to watching their beautiful enaction of Manik and Nandini making it a memorable romantic pair ever in recent times.

6 years ago congrats to all the cast of Kaisi Yeh Yaariyan...u really rock the show...love u all...especially love Parth Samthaan n Niti Taylor as manik n nandini...n hats off to the director

+ 2
6 years ago Congratulations to the entire cast and Team of Kaisi yeh yaariyan. this Show stands out and is very different and thats why i love it so much and i am glad it does so well in india as i am a outside Viewer and not a Indian i am super happy to hear that and i am sure they had much fun especially parth samthaan he loves Food :P