We had a talk with the winner about the journey in the show and this is her take... 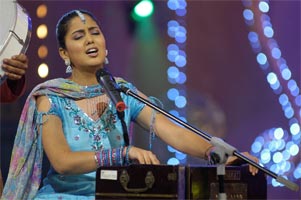 Featured Video
“I was positive about winning the show and today I’m very happy as my hard work paid off,” she expresses.

Elaborating on her journey she explains, “These four months for me was full of activity. Every time there was a new challenge and we all were busy preparing for it, doing riyaaz and then shooting for long hours. Today it’s the end of my journey with Junoon, but also a new start.”

“Junoon was an important platform for me as it has given me recognition. I have sung number of songs as playback singer, but this show has given me face. Today people not only know me for my voice, but also recognize me by face which is a good feeling,” she adds further.

Why did you choose Sufi when you could have easily gone for Bollywood? “I had been doing playback singing but in this show, I wanted to do something different. I have not learned this special gharana, but heard it and thus tried singing. My take away from the show is the experiences,” she quips.

Harshdeep has recently sung for Himesh Reshamiya’s Karzz. “I have sung the title track for the film. Besides that I also sung for Rang De Basanti and many others. Today my family is very proud of me and I also thank my mentor Rahat Fateh Ali Khanji for supporting and nourishing me,” she concludes.

The finale episode also saw all the eliminated contestants of each genre perform for one final time and stupendous performances by the mentors Ustad Rahat Fateh Ali Khan, Ila Arun, Anand Raj Anand, leaving the viewers and studio audience hooting for more. And above all, Bollywood's most sought after stars Amitabh Bachchan and Abhishek Bachchan will be gracing the Grand Finale tonight, September 27th....

13 years ago GUd that she understtod the value of choosin meaningful cinema!!

+ 2
13 years ago Congratulations to Sufi Genre, Harshdeep and RFAk. Thanks for sharing.

My favs Ali ABbas and Akbar Ali were just fantastic with RFAK and Harshdeep with Mast Kalander and today with Richa today.

13 years ago hurray i was expecting she she would win this becoz she is always ppls fav.she is not only gud luking but also extremely talented she deserves this title

junoon show has soo many nice singers its one of the best show for singing but it wasnt given tht popualrity as saregamapa or indian idol or voice of india .but in singing terms this show is the best of all the above