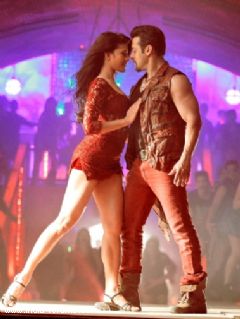 Salman has managed to awe his fans with the latest song 'Jumme ki Raat' from his upcoming film 'Kick'. The song that released few days back has already achieved the title of being the most downloaded song online. Shot completely in Mehboob studios, 'Jumme Ki Raat' has become one of the most popular songs on the music circuit. It has received an overwhelming reception with more than 5 million hits and 32,000 likes on YouTube in a very short span.

The video features the lead pair Salman Khan and Jacqueline Fernandes at their best, grooving to choreographer Ahmed Khan's steps. With a raw feel and foot tapping beats, the track has managed to capture audiences' hearts.

The song launch was a grand occasion with about 100 girl fans thronging the event to show their love for the actor. Throngs of female admirers attended the event making the song and the evening a special one. The trailer has also broken records on YouTube since its launch. The audience has been showering 'Kick' with much love and support. All social properties of the film have been abuzz with various comments and praises for the film. 'Jumme ki Raat' is a treat for fans who are eagerly awaiting the release of the film.