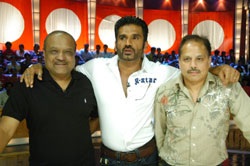 Bollywood celebrities, Juhi Chawla and Suneil Shetty, bring entertainment galore to the finale episode of Reliance Mobile ‘Kaho Na Yaar Hai’, Friday, April 18, 8 – 9 pm only on STAR Plus. Accompanying Juhi were her friends, Shabnam and Vineeta, while Suneil’s childhood friends Ajay and Ravi were part of his team.

The usually chirpy Juhi Chawla was caught in a rather somber mood when the first round proved to be a complete dampener for her team. They only managed to get very low scores while Suneil and friends were on a winning streak having got most of the correct answers. 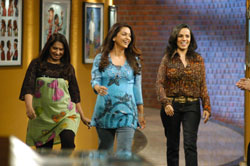 Juhi and team lagged behind yet again, faced with a slimy task of separating an egg white from the yolk before posing a question to the team, while macho man Suneil and friends enjoyed what they do best, punch a boxing machine and ask questions. Evidently, Suneil’s team had the lead over Juhi’s yet again!

Lightening the mood, Juhi and Suneil’s gags had everyone in splits. Juhi is stumped when Mrukut Bhang Chaturvedi, a film writer, offers Juhi the role of a mother for a script he’s been writing for 10 years! Surprised by the time spent by him on the script, Juhi urges him to narrate it and is in for a shock when he narrates an absurd script and to add to it asks her to invite Sanjay Dutt, Salman Khan and Shahrukh Khan to be a part of the film. At this point, Juhi’s patience gives way. Rattled, she asks the writer to leave immediately.