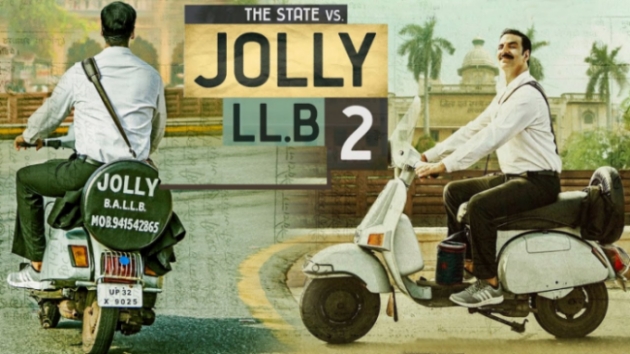 Baseline: A story of a lawyer seeking justice (out of guilt) for a pregnant woman who committed suicide because he tricked her with a huge amount of money!

Plot: Jagdishwar Mishra aka Jolly (Akshay Kumar), an advocate who works under a famous lawyer, has a dream of having his own chamber at the court. He fulfills that dream by doing a fraud.
The path Jolly chooses to acquire wealth to build his chamber, forms the crux of the story! The story gradually advances with Jolly realizing his mistake and working towards correcting.
There are many twists and turns that will hold your attention until the end.
Performance:

Akshay Kumar has perfectly got into the skin of the character. As the name of the film suggests, Jolly, he is shown as an amateur lawyer who doesn't know the exact rules and regulations of the court. With perfect dialogue delivery, he has just given a fantastic performance!

Huma Qureshi: The actress plays the character of Jolly's wife, Pushpa Pandey. She adds glamor to the movie. There are few scenes of her which will make you laugh for sure. She is shown as a modern wife who loves to buy 'Gucci' dresses and drink whiskey!

Saurabh Shukla: Though Akshay might be the hero of the film, Saurabh adds life to the film. He brings the real joy in the film. He plays the character of Sunder Lal Tripathi, Judge of the Lucknow Court. His expressions and dialogues have contributed a major part to the film. In short, the film would be incomplete without him.

Annu Kapoor: He plays the role of 'Pramod Mathur', one of the top notch lawyers in Lucknow. He fights the case of the accused 'Suryaveer Singh (Kumud Mishra)'. He fits perfectly in the character. Like always, he has given it all to the film.

Sayani Gupta: Just the best! Though she has a short role in the film, she leaves an impression with her classic performance!

Actor 'Manav Kaul' and 'Inaamullahaq' are a perfect addition to the film.

Though the actors have given their best performances, an equal amount of credit goes to the dialogue writers and the story writer, for delivering a fully entertaining package to the audience.

It has become almost obvious now that it's an Akshay Kumar film, it will definitely have a national message or give rise to your nationalism at the end of the movie, which I feel is true!

One thing which was not needed is the abrupt addition of the songs which interrupts the flow of the film.

4 years ago This is entertaining movie and in this movie Akshay Kumar and Huma Qureshi's performance is amazing.

kavyakapoor1190 4 years ago Performance of entire star cast and funny one liner are the highlights of the film.