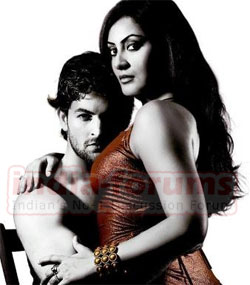 Featured Video
Rating-**1/2 Shriram Raghavan re emerges after petty long and true to his style, attempts something unconventional yet again with ‘Johhny Gaddar’. The film has been dedicated to thriller master James Hadley Chase and the film does end up paying homage to its inspiration.

There are plenty of references to the Chase’s novels as well as old Hindi flicks. So much so that the protagonist gets inspired by an old Hindi film to commit a crime and importantly to use the name Johnny.

Just like Saif Ali Khan in ‘Ek Haseena Thi’, the protagonist here played by newcomer Neil Mukesh is a dark character. Interestingly in this unconventional thriller the viewer knows beforehand who the killer is.

Young Vikram (Neil Mukesh) is part of a gang spearheaded by Dharmendra which specializes in making quick bucks. When there is a chance to win a huge sum in just four days, he and his gang members (which also include Zakir Hussein and Vinay Pathak) chalk out a perfect plan to get this happen. It is then that greed takes over Vikram who is in love with the much married Mini (Rimi) and he decides to double cross his partners. He ends up killing one after the other and they come to know very late that he is actually the bad guy amongst them. There are a lot of interesting moments which hold the film together. 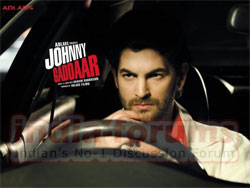 Another big strong point is the casting. The performances are quite strong which works in its favor. Dharmendra enters the skin of his cool and calm and the veteran’s touch makes a hell lot of difference in the film. Neil Mukesh is not only a good looker but also a good performer. In this debut film he has carried off the performance oriented role with élan. He plays the suave baddie with very few emotions well. Inpsite of all that he does it become difficult to hate the character.

Rimi Sen’s presence is brief but she suits the role. The film is replete with fine actors like Zakir Hussein, Vinay Pathak, Govind Namdeo, Ashwini Kalsekar who suit their roles and help the cause of the film. The film has been shot unconventionally and it goes with its ‘different’ feel well. The music too suits the movie.

This movie should appeal to a section of the audience, those who are okay with enjoying different cinema.