Mumbai, Feb 26 (IANS) UTV and Ashutosh Gowariker have good reason to feel happy. The box-office performance of their co-production, 'Jodhaa Akbar', is improving slightly, especially in Mumbai, in the second week since its release.

'Some movies which have a lacklustre opening in terms of money collected at the box-office often do well as days progress. In Bollywood, this phenomenon is called the outcome of word-of-mouth publicity,' said Sunil Boobna, a distributor.

This is exactly what has happened in the case of 'Jodhaa Akbar'. The favourable viewer reports of the movie are now drawing fresh crowds.

The movie is also doing well in Andhra Pradesh and Karnataka. While the Andhra circuit registered a collection 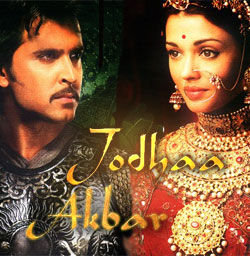 The first week's collection figure in Tamil Nadu and Kerala, however, is rather poor in comparison. It is only Rs.8.2 million.

The Tamil and Telugu versions of the movie are yet to be released.

In the Middle East, 'Jodhaa Akbar' is heading towards the top-three slot, a record for a Bollywood movie released in the theatres there.

Although the movie opened on an uncertain note in Mumbai, what with the multiplexes refusing to showcase it because of differences with UTV over their percentage of share from box-office collections, its gross collection in Mumbai in the first week stood at Rs.178 million.

Those who shunned the movie may be ruing the fact that PVR, the only multiplex that picked it up, received a comfortable Rs.40.8 million in the first week.

But audiences in Delhi and Uttar Pradesh seem to be responding to the movie rather guardedly. 'Jodhaa Akbar' mopped up only Rs.70.8 million from the region in the first week.

In comparison, the movie garnered Rs.20.4 million in the first week in a smaller territory like Punjab.

Although the movie could not be released in Rajasthan due to protests by a section of the Rajput community there, its first week's box-office performance in central India-CPCI territory - comprising a part of east Maharashtra, Madhya Pradesh and Rajasthan - cannot be said to be as bad. It mopped up Rs.20.9 million.

But in the second week, the movie was banned in Madhya Pradesh.

'Jodhaa Akbar' has received a lukewarm response in eastern India. The first week's collection from the region was only Rs.28.3 million.

In the overseas market, the movie has fared better in the US than in Britain. In the US, it collected $1.6 million in the first three days, while making $0.4 million in Britain.