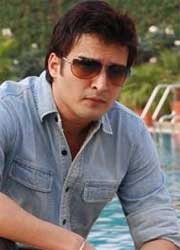 According to our source, "The winter temperatures have made the whole cast and crew of Tannu weds Mannu very restless. As it is everyone is jumping around to keep themselves warm and here we have Jimmy keeping himself worked out playing one or the other prank."

Says the source, "Once it so happened that Kangana was just standing absent mindedly and Jimmy took a twig from the ground and slightly pricked her neck. Kangana thought its some insect and screamed shocking everyone. Jimmy simply kept howling with laughter."

Jimmy's main target however is Madhavan. Says the source, "With Madhavan, it has become a daily habit for Jimmy to do mischief. He won't leave Madhavan even on a 15 minute break. He would quietly go stand on Madhavan's right side and pull his left sleeve. When Madhavan would turn left to see who did it, Jimmy would start sniggering!"

Tannu weds Mannu is a romantic comedy directed by Aanand L. Rai. The film has been shot in some exotic locations in India including Kanpur, Faridkot, Patiala and New Delhi.