The first two episodes of Sony's Jhalak Dikhhla Jaa 3 were a whopper. A sparkling line up of celebrity contestants, three female judges who promised a whole lot of masti and two not-so-bad hosts, JDJ thankfully didn't make us reach for the remote, even once. 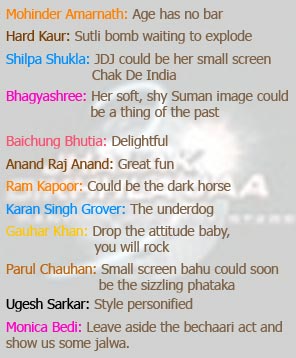 Compared to the earlier two seasons, this one has a nice mix of celebrities, whether it's the delicious Gauhar Khan and her groovy gyrations; Hard Kaur's tagda Punjabi punch; Ugesh Sarkar's magical moves; Ram Kapoor's lazy latkas; Karan Singh Grover's tattooed style, Mohinder Amarnath's masti and Baichung Bhutia's innocent charm – they are an eclectic bunch and fairly easy on the eye.

About the judges, Saroj Khan's new look, Juhi Chawla's pleasing persona and Vaibhavi Merchant's (though we thought she's put on a few inches) hatke style of 'judgment' – the way she described music composer Anand Raj Anand's dancing style was good fun. And to give them their due, all three of them didn't mince words when it came to passing their verdict. There were no concessions or considerations, whatsoever.

As for the hosts, while Shweta Tiwari's sizzling sexy avatar had the men in my house panting for more,  while Shiv Pandit is just right – not overly friendly, just the right amount of enthusiasm. What we also liked was the very Bigg Boss-like Jhalak House where a few hidden cameras have been doing the nasty job of capturing the celebrities' true colors – Ram and Hard Kaur's colorful lingo, Gauhar's misgivings about her choreographer Hanif Hilal (she openly bitched about him in front of another choreographer and had the gall to deny it – tsk tsk, not done, sweetie), the so-called soft-spoken Bhagyashree's superstar-like tantrums (we mean she has only Maine Pyar
Kiya as her claim to fame, but she behaved like a diva); the macho man Karan Singh Grover's tattoo and stunning physique on full display; Anand Raj Anand's mischievous banter with Rosita, his dance partner; Parul Chauhan's sweet nothings with her choreographer Deepak (sharing a glass of nimbu paani, if you please) – it was full on masala and it's only the first week. Aage aage we are sure there is more in store.

While this year the current editions of any of the seasonal shows (read Voice of India, Sa Re Ga Ma, Nach Baliye 4, Indian Idol 4) didn't do as well as expected, JDJ has all the ingredients to woo the viewers.

Verdict: A bumper start, hope there are no speed-breakers ahead..... 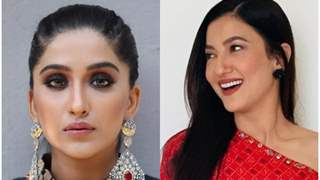 tedaniela_20 11 years ago Karan is the best in everything dance, acting, singing I love him

Kul-gal 12 years ago Oh my god! Dey r choosin ratan rajput 4 jdj ssn 4! She iz just so aaarrrggg!! Wherever she iz invited, she cmes in her village clothes! Foolish! I want her ooouuuttt!

aisha93 13 years ago KARAN SINGH GROVER!
Karan should have won, he put his best foot forward, and i agree with Nicole even knowing that he wasn't welcomed by the judges he still did his best and thats what matters!
Karan we are love u!

u will win the competition....