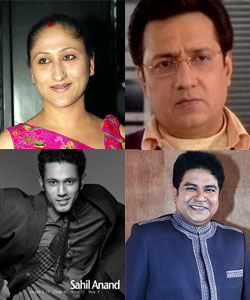 We bring you more names from the Sasural of Simar.

Jayati Bhatia who plays Manju aunty in Sasural Genda Phool will play the head of the family, Daadi. Adarsh Gautam and Ashiesh Roy will play her two sons. Sahil Anand, Shoaib Ibrahim and Vishal will be seen as the three sons of Adarsh and Abhishek Sharma will play Ashiesh Roy's son.

Sasural Simar Ka is about a middle class conservative family where in the aspirations of a girl to be a dancer is restricted.

The show was set to go on floors from 18 April, but due to some issues the show is now set to launch on 24 April.

As reported earlier, Sasural Simar Ka will be telecast at 7:30 pm and Rishton Se Badi Pratha will be shifted to 7 pm.

xitijj 7 years ago Loving the romance between prem and deepika...
...

rupinr 7 years ago you are the best as Premar and We love premar sooo much. keep rocking

sali195 9 years ago I am not watching any new shows on colors anymore WHATS THE POINT!!!!!!!, they are just gonna end up ruining this show 2 like the way they are ruining their other soaps like LTL, BV, NAIDL AND UTTARAN. The channel don't care about their viewers at all but just want a way to get more money i am gonna cancel my colors subscription ASAP!!!!!!.

-Preeti- 9 years ago Am happy that Abhishek wud also be part of this Show. Just wanna wish him n others all the very Best

rekha02 9 years ago Thanks, this show seems the first fun filled show after rural overdose on colors, The promos makes the show interesting.

Sushant’s sister Shweta Singh Kriti shares a video of a fan ...
7 minutes ago

Parth Samthaan: Kasautii Zindagii Kay has shaped me as an ...
43 minutes ago

Saying Goodbye To 'Keeping Up With the Kardarshians' - ...
14 hours ago
View More
TOP