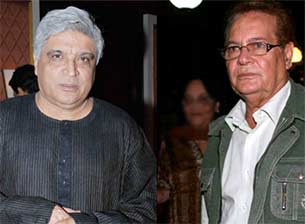 It seems that the well-known Bollywood scriptwriters Salim Khan and Javed Akhtar, who scripted many successful film's like "Zanjeer" and "Deewaar" together, may team up again.

"You never know there are possibilities. Have some patience," Akhtar told reporters Thursday when probed about them working together.

Both the writers came together afer eons to unveil the first trailer of "Sholay 3D".

Which actor or director would you like to work with?

Salim Khan said: "Everything depends upon the script and casting is a very important department."

Their last film together is said to be "Mr. India", which was released in 1987.

When asked what went wrong between them, Salim Khan said: "Difference of opinion always happens, but you can always sort that out."

Sneha Jain of 'Saath Nibhana Saathiya 2' Sacrifices Her ...
12 minutes ago