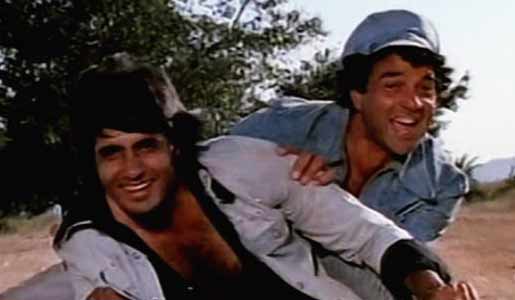 Amitabh Bachchan and Dharmendra's camaraderie as Jai and Veeru in cult film "Sholay" has been voted the best example of onscreen friendships in Bollywood, in a new survey.

International Friendship Day falls Sunday, and ahead of the occasion, matrimonial website Shaadi.com conducted an online survey to find out what the country's single Indian women felt about famous celebrity friendships.

When they were asked to vote for the best onscreen friendships in tinsel town, 39.1 percent of the 4,700 respondents voted for Jai and Veeru.

It was followed by Anjali and Rahul from "Kuch Kuch Hota Hai" with 33.8 percent votes. They were characters essayed Kajol and Shah Rukh Khan respectively.

On the third spot are Vijayalakshmi and Rani from "Queen" with 14.2 percent. Vijayalakshmi was essayed by model-actress Lisa Haydon, and Rani was played effortlessly by Kangana Ranaut.

The top four were rounded up the "3 Idiots" trio of Rancho, Raju and Farhan with 12.9 percent. The roles were immortalised on screen by Aamir Khan, Sharnan Joshi and R.Madhavan respectively.

"The results suggest that people are looking at celebrities as real people with real relationships. These are some of the most successful Bollywood relationships whose love and understanding for each other also makes them great friends," Gourav Rakshit, COO, Shaadi.com, said in a statement.