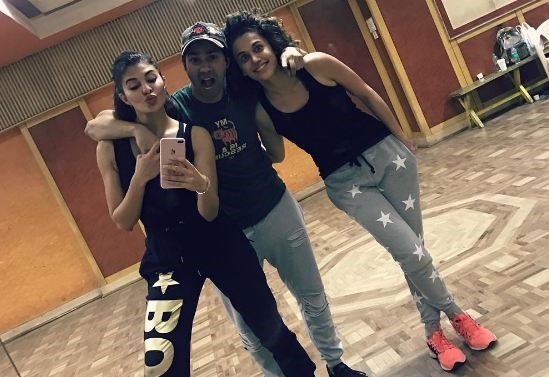 Judwaa 2 team is currently shooting a song for the film and the actors Varun Dhawan, Jacqueline Fernandes and Tapsee Pannu were seen rehearsing for the same.
Varun, Jacqueline, and Tapsee were apparently prepping up for a dance number Tan Tana Tan recreated from the 1997 blockbuster Judwa.
Tan Tana Tan is one of the most famous party songs. The much-loved party number is still one of the favorite dance numbers of Bollywood.
Varun Dhawan who is a kickass dancer would be shaking a leg with the exceptionally brilliant dancer Jacqueline. Jacqueline is one of the few actresses who has given major chart buster party numbers. The surprise package in the song would be Tapsee Pannu who too would be seen matching steps with the two.
The actors are set to burn the dance floor for Judwaa 2, with 'Tan Tana Tan' choreographed by Ganesh Acharya.
The trio had already shot a song Oonchi hai building for the film, which was a very fun filled experience for them.
The actors came together for the song and from the looks of it, they seem to have great fun during it.
Jacqueline took to Instagram to share a picture of the actors as they pose after the rehearsals of the song.

Oonchi hai building and Tan Tana Tan the two classic number from Judwaa are reprised for the fun filled Judwaa 2.
The actors currently in Mumbai will leave for their Portugal schedule after the songs shoot.
Produced by Sajid Nadiadwala, directed by David Dhawan, Judwaa 2 is presented by Fox Star Studios and Nadiadwala Grandson Entertainment. The film is set to release on September 29.
0 Likes

"Miss Those Times": Jacqueline Fernandez on the Anniversary of her Two ...

Taapsee Pannu Goes Out of the Way; Winning Hearts for her Kind Gesture