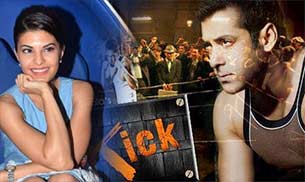 Sri Lankan beauty and Bollywood actress Jacqueline Fernandes, who has wrapped up shooting the Delhi schedule of her upcoming film "Kick" with Salman Khan, says she had a lot of fun while filming in the capital as got to see many places that she had never seen before.

"I had a lot fun in Delhi. It is very different. There is a lot of stuff to do there. The shooting experience there was also amazing," Jacqueline told reporters in Mumbai Wednesday at the red carpet of Stree Shakti Women Awards.

"I got to see the places I hadn't seen before. That was really good," she added.

The 28-year-old also tasted some delicacies of Delhi and enjoyed them.

Directed by Sajid Nadiadwala, "Kick", the Hindi remake of the 2009 Telugu hit of the same name that featured Telugu superstar Ravi Teja, has been extensively shot in Delhi.

Slated to release in July this year, it also features Nawazuddin Siddiqui and Randeep Hooda in key roles.