Voice modulation and languages were earlier considered Akshay Kumar's weak points as an actor. But he is determined to change all that. 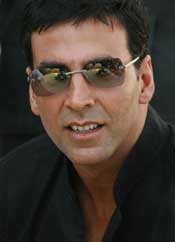 Featured Video
Akshay recently visited the Spanish-speaking countries Honduras and Puerto Rico and picked up a smattering of Spanish terms and phrases which he uses generously on his family, much to their amusement and annoyance.


'I like connecting with foreigners, understanding their language. It's not enough for me any more to speak Hindi, Punjabi, Marathi and English. I want to know foreign languages. The only way for me to grow as an actor is to broaden my horizon,' Akshay, who is basking in the success of his just released 'Kambakkht Ishq', told IANS.


More than the cuisine or the touristic sights, Akshay is fascinated by the language of the countries he visits. Often wife Twinkle would be seen shopping during the just-concluded vacation while Akshay would strike up a conversation with strangers.


So does Akshay intend to be as good with languages as he's with kissing? His 'Kambhakkht Ishq' co-star Denise Richards has described him as a good kisser.


'Yeah, I heard about that. Hmmm...It's not as if I travelled to the moon or achieved something to be proud of. But anyway I'm happy. Good action hero, good comic actor, and now a good kisser. Maybe people will start calling me a good actor soon. I'm working on it,' he said.


About matching paces with Sylvester Stallone in 'Kambhakkht Ishq', Akshay joked: 'It's only because I take Chyawanprash. But don't tell Stallone about it. I don't want him to start taking it also.'


On a more serious note, he said: 'When I was working as cook in Bangkok, I had three posters on my wall. Bruce Lee, Sridevi and Sylvester Stallone. The first of my idols I couldn't work with. But I've been lucky enough to work with Sridevi and Stallone.'