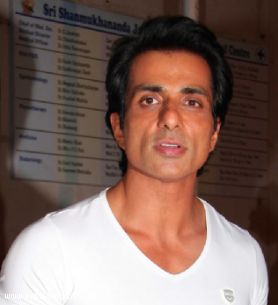 Actor Sonu Sood, who has mostly been part of action films, will soon be seen in comedy film "It's Entertainment". The actor found the genre challenging, but says the film's makers eased out the experience for him.

"'It's Entertainment' is a fun film and I enjoyed doing it," Sonu told reporters here Monday at the trailer launch of the film.

"I have not delved into this genre much, so as an actor, it was challenging for me. But when you have a producer like Ramesh (Taurani) and director like Sajid-Farhad, everything becomes easy," he added.

The 41-year-old, who has been part of action thrillers like "Dabangg", "Shootout At Wadala" and "R...Rajkummar", also said: "I enjoyed a lot doing this film. I think the USP of doing comedy films is that you enjoy a lot."

Jointly produced by Ramesh Taurani and Jayantilal Gada, "It's Entertainment" has been directed by writer duo Sajid-Farhad.