Ekta Sharma, who currently plays a parallel lead in Solhah Singaarr shares her name with daily soap czarina Ekta Kapoor, and is quite amused when she receives calls from struggling actors asking for jobs. She says, “At times I find it very funny when I receive calls from people who mistake me for Ekta Kapoor. It’s quite amusing when they send me messages wishing me on women’s day or send birthday wishes on Ekta Kapoor’s birthday.” 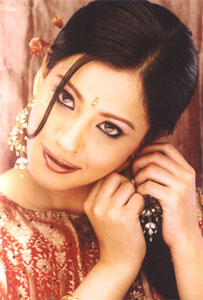 Featured Video
Speaking about her character in the Sahara One show Solhah Singaar, Ekta says, “My character is similar to Kajol in Kuch Kuch Hota Hai. Two of my closest friends get married to each other. Despite that, I continue to be their best friend. Unfortunately, his wife suffers from brain tumour and she tries to bring us together.” Rumors are that her character will turn negative in the near future to which she quips, “My character might turn negative, I really don’t know though what will happen in the future.”

Ekta has played both negative and positive roles in the past, so which shade does she prefer playing more? Ekta replies, “As an actor, I have to enact the different shades of life in my roles. I think I will learn a lot more only if I experiment with my roles. For instance, I am playing a cameo role in Kis Desh Mein Hai Meraa Dil and my character is again negative there. I try to con the lead girl Heer to get married to my abnormal brother just to gain rights to the property.”

Well, a famous name or not, the young lass has definitely managed to create a name for herself in the industry!!!

desiest12 14 years ago stuipd mediaa..hate u all love u katrina

14 years ago neways u go katrina u tell da media

neways its known media doesnt lyk salman khan coz salman doesnt lyk sucking up to them hihihihiiiiiii he's a rockstar ;)

14 years ago yeaaaa we never know that Sallu hvent slap u ...its media spicy masala...dont care about it

so her real name is ekta.. dat gr8. she is a chweethrt

viqbal'sforever 14 years ago yea shes the same girl from khwaish!!
thanxx for the arcticle!