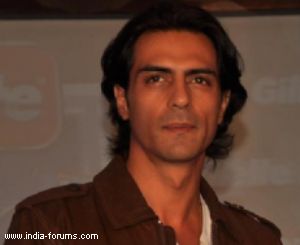 Actor Arjun Rampal says he would be happy if Madhur Bhandarkar's "Heroine" or Sudhir Mishra's "Inkaar" are showcased at the forthcoming Cannes film festival.

"I would love to. That is a film that deserves to be there. If 'Heroine' can be showcased there, it will be great," said the actor.

In fact, Bhandarkar's "Heroine" was announced with Aishwarya Rai Bachchan at the Cannes last year. But later, due to the Ash's pregnancy, the director had to replace her with Kareena Kapoor.

"There is a Sudhir Mishra film as well that I have just finished, which is also perfect for Cannes. So yeah, if I can showcase that, great," the 39-year-old said while being presented as the brand ambassador of alcohol brand Chivas.

The actor is expected to make an appearance at this year's Cannes festival, which begins May 16 as Chivas is the official partner of the event.

While "Heroine" stars Kareena in the title role, "Inkaar" has Chitrangada Singh opposite Arjun.

Talking about his association with Chivas, he said that initially he was sceptical about being associated with an alcohol brand but he strongly believes that life is about experience.

"I thought about it myself that should I represent a brand like Chivas because I also represent health, I represent fitness. But, at the end of the day it all comes down to one thing - you should do everything in your life. My philosophy is that whatever you want to do, you must do but have no habits," said Arjun.

"As long as you have no habits you can do everything. That habit even means working out too much and being too thoughtful about your diet. You must experience everything, life is about experience," he added.

Arjun also reveals that he didn't drink till he was 21 and had a strong reason for it.

"The first time I had a drink was at the age of 21, that's quite late. I was training to be an athlete, I had a wish to run the 400 meter for India but that didn't happen," said the actor.

He is currently shooting for "Heroine" and is set to start work on Prakash Jha's "Chakravyuha" soon.