Barkha Bisht plays the lead protagonist in Aroona Irani’s Doli Saja Ke on Sahara One. The svelte actress loves to groove which she rightly proved with her beau on Nach Baliye 3 and now the belle has chosen to perform on Aroona Irani’s numbers in the special event ‘Kudiyon Ka Zamana’ that will air on May 30th, at 8.30 pm on NDTV Imagine. Says the actress, “It was a great experience to dance on the most scintillating numbers of Hindi Cinema. I will be performing on Aroona Irani and Madhuri Dixit’s songs. It is very difficult to match the dancing style of Aroonaji, but I enjoyed it and have given my best shot”. 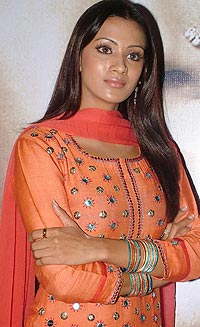 Talking about reality shows, the buzz is that Barkha Bisht and her better-half Indraneil Sengupta were recently approached for Sony’s new reality show Gharwali Baharwali. When asked about this, Barkha says, “Yes we were approached, but we refused to take part as Indraneil is not very comfortable in a dancing reality show”.

Barkha Bisht, popular for her sedate role of Anupama in Sahara One’s Doli Saja Ke has changed avtars and is now determined to protect herself and her husband from evil eyes. Talking about her new roop in the serial, Barkha says, “Anupama has got smarter now, has gained all the strength from dadi, played by Aroona Irani. She will now try her best to disclose Bhabhi’s plans”. When asked about the love triangle formed in the serial with the entry of Daksh’s lover Dia, Barkha says, “Daksh never loved Anupama and was always in love with Dia. With Dia back now, Daksh will slowly realize the importance of Anupama in his life and will eventually get to know the difference between Dia and Anupama”.

Well, here is a perfect all-rounder who gives her best shot, whether it be acting or dancing!!

kushi333 14 years ago i luv their jodi... they r the cutest couple both onscreen n offscreen....!! i had left watchn DSK b4... but nw again its bcm interestn... infact im lovn it nw much more..!! wth anu bcming bold its really getting heated up !! :)
n yar daksh had proposed to anu.. n was running at the bak of her... but he nevr luvd her .. he tells dat after marraige dat he had married her nly bcoz of his grandpa will... nly then he wud get his property in his name... dats why he was in so much hurry to marry her... but nw he too is falln 4 her !! hurray !! :>

+ 3
14 years ago daksh never loved anupama?? but i think it was daksh who proposed her nt anupama!!