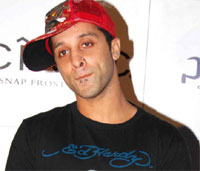 Reports are that the launch of Sony's adventure based show, Iss Jungle Se Mujhe Bachao, on the lines of I'm a Celebrity.. Get Me Out of Here, has been delayed by a week, as few of the contestants who are to reach the jungles of Malaysia are yet to sign on the dotted lines.

However, news is that Ishq Bector, the Indo-Canadian Hip Hop artist who is a singer, song writer, producer and performer has been finalized and he will be seen in the jungles very soon.

Ishq has written, produced and sung music for films like Dhoom 2, Fight Club and Pyaar Ke Side Effects. He rose to fame with 'Ishq De', the music of which is popular even today.

According to our source, "Ishq is finalized, and along with him will be seen Shweta Tiwari, Mona Vasu, Fiza Mohammed, Aman Verma, Chetan Hansraj, Akashdeep Saigal. Niger Khan the item girl is in the running and is expected to be finalized soon".

Well, guess we should be soon set for all the action that takes places in the jungles of Malaysia..

13 years ago i want this show on air like rite now..cant wait...