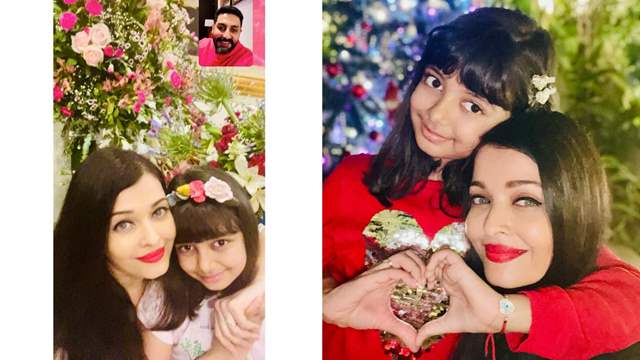 Bollywood’s royal couple Aishwarya Rai Bachchan and Abhishek Bachchan have clocked 14 years to their beautiful married life. The duo had tied the knot on 20 April 2007 and welcomed a baby girl Aaradhya in 2011.

Abhishek and Aishwarya celebrated their wedding anniversary virtually as they are not together on this special day. While AB is out shooting, his darling wife gave her followers a glimpse of their long distance celebrations.

On Wednesday, Aishwarya took to her Instagram handle to share a screenshot of a video call with husband Abhishek and their lovely daughter Aaradhya also accompanied them on the call. We see pretty bouquets of flowers in the background and we’re guessing that Abhishek might’ve sent those to his wife from miles away!

While Aish looked pretty as ever, baby Aaradhya flashed a sweet smile and Junior Bachchan looked dapper in a pink sweatshirt. Have a look:

A day ago, Tina Ambani had taken to Instagram to wish the couple on their wedding anniversary. Sharing a picture, she had written: "Can’t believe it’s been 14 years since your beautiful wedding! Still crazy in love, utterly gorgeous and the most fabulous parents to Aradhya. Blessings and heaps of hugs and love - happy anniversary @bachchan @aishwaryaraibachchan_arb."

Meanwhile on the work front, Abhishek Bachchan is currently in Lucknow where he was shooting for the film 'Dasvi.' The social comedy film also stars Yami Gautam and Nimrat Kaur in key roles.