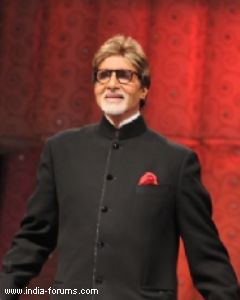 New Delhi, Sep 12 (IANS) Megastar Amitabh Bachchan, who is set to make his Hollywood debut with Baz Luhrmann's 'The Great Gatsby', says larger numbers of the global population watch Indian movies as opposed to Hollywood and that Indian actors are a recognizable force outside the country.

'Indian actors are a recognizable force outside Indian shores as well. I may be wrong in my assessment here, but it has been statistically proven that a larger number of the world population watches Indian movies as opposed to Hollywood - 3.8 billion to 3.2 billion,' Big B posted on his blog Bigb.bigadda.com.

The 68-year-old also said that there are many Indian stars who get more attention than their Hollywood counterparts in international projects.

'Stars from India getting global celebrity managers is an individual decision. Perhaps you are unaware, but many already do. Hollywood is a richer entity and has the advantage of a more universal language, but there are several examples that I have been personally witness to, where the Indian stars, with all due respect, has garnered greater notice than his Hollywood counterpart,' he added.

However Amitabh, who will be making a special appearance in 'The Great Gatsby', feels it is obvious that in a Hollywood project, American actors will always get prominence.

'At the end of the day we must remember a most basic fact. We are the Indian film industry and they are Hollywood from America. There shall always be a prominence to American actors in Hollywood, just as there is a prominence of Indian actors in Indian films. A ShahRukh, Salman or Aamir may well be an unknown face in one of the towns in midwest USA, but so would a Brad Pitt or Tom Cruise in Yavatmal or Giridih,' he posted.

'How many foreign stars have you noticed gaining prominence in Hollywood apart from that odd Omar Sharif, Jackie Chan or Bruce Lee? Even British artists, which really should be considered, nationwise, as individuals from the same community, have a limited presence.

'And how many Hollywood stars do we see in our films? Forget Hollywood, even artists from regional cinema in India have a rare presence in our own films - Hindi film artists in Tamil, Telugu, Kannada, Malayalam or Bengali films and vice versa,' he added.