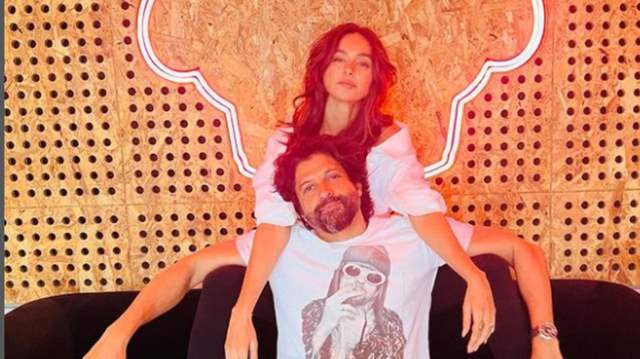 Shibani Dandekar and Farhan Akhtar consistently set couple goals. They frequently pose together for photos, which when posted to Instagram cause all of their fans to drool over them. The duo is presently enjoying a great time in Australia attending a friend's wedding.

The two have been sharing photos, documenting their Australia trip, and today the Zindagi Na Milegi Dobara actor shared yet another picture of them appearing absolutely stunning.

Shibani Dandekar and Farhan Akhtar may be seen twinning in white t-shirts in the photo that Farhan Akhtar shared. Farhan sported a white t-shirt with grey joggers, while Shibani chose a chic white blouse that she matched with black pants.

The actor was seated directly beneath Shibani on the couch's backrest. We can't help but notice their swag in the photo, and they certainly look great together. Sharing this picture, Farhan wrote, “Just the three of us .. #nirvana @shibanidandekarakhtar.”

For the uninitiated, Farhan Akhtar will make his directing comeback with Jee Le Zaraa, starring Priyanka Chopra, Katrina Kaif, and Alia Bhatt, after a ten-year absence. When the film was first announced last year, Farhan shared a note that read, "About time the girls took the car out.’ Later, Farhan took to Twitter and wrote, “Did someone say road trip? Thrilled to announce my next film as director and what better day than 20 years of Dil Chahta Hai to do it? #JeeLeZaraa with @priyankachopra #KatrinaKaif @aliaa08 I cannot wait to get this show on the road”.

Jee Le Zaraa, written by Zoya Akhtar, Reema Kagti, and Farhan, is anticipated to go on floors by the next year.