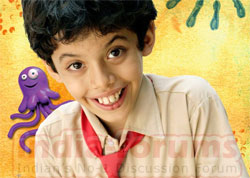 New Delhi, Dec 30 (IANS) Children are calling the shots at the box office.

In 2007, the Hindi entertainment industry embraced the new-age marketing mantra of selling to and through children. The recently released 'Taare Zameen Par' is a case in point.

The most remarkable difference was that none of these films were funded by government bodies entrusted with the task of promoting children's cinema.

They, instead, had big industry names associated with them.

The biggest was Aamir Khan's directorial debut 'Taare Zameen Par' that not only drew standing ovation from critics, but also touched moviegoers and made the cash register ring. 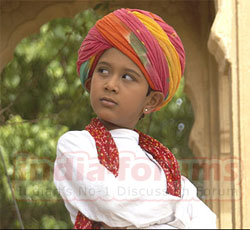 The Akshay Kumar starrer 'Hey Baby' may not be exactly ideal for children to watch, but it was a laugh riot and a good watch for wannabe parents.

Moreover, there were a slew of animation films including 'Bal Ganesh', 'My Friend Ganesha' and the recently released 'Hanuman Returns' directed by none other than Anurag Kashyap.

Never before have so many films for children competed simultaneously with big-budget potboilers for the attention of producers, distributors, exhibitors and cine-goers.

Despite the fact that children have a major say in consumption patterns of Indian households and hence contribute to the success of a movie, the Hindi film industry has traditionally shied away from peddling children's films.

While the idiot box has been quick to grasp the value of catching them young and is inundated with channels dedicated to children and the advertising world routinely relies on children to sell products, Bollywood has been rather slow to learn the new marketing mantra.

In spite of successful children's films like 'Makdee' that grossed over Rs.7 millio 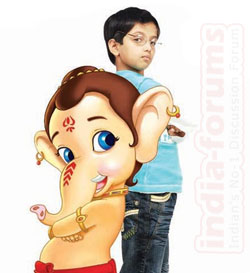 n and 'Hanuman' that mopped up Rs.30 million, the industry prefers not to invest in films that feature children alone and instead go for films that appeal to children as well as adults like 'Koi ... Mil Gaya' and 'Krrish' that made Hrithik Roshan an icon among children and earned over Rs.180 million and Rs.410 million respectively.

The commercial success of 'Taare Zameen Par' in which Aamir has taken a backseat and child actor Darsheel Safary emerges as the star, gives hope that more such films will be churned out in the future.

According to Vishal Bhardwaj, whose 'The Blue Umbrella' bagged the National Award for the best children's film, the market for children's films in India is huge and untapped.

Unlike Hollywood where the budget of a 'Harry Potter' film can easily compare to any top line film, in India investing in such films was not considered wise until recently.

'It was a vicious circle. Whatever children's films have been made over the years were low-budget endeavours of a handful, well-meaning, creative lot. With fewer outlays for children, the outcomes have not been too spectacular and hence for most Bollywood filmmakers, this g 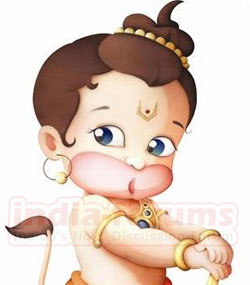 With high quality small budget movies doing roaring business, Bollywood is desperate and willing to tread paths less travelled. The industry is looking to movies like 'Bheja Fry' that was made for under Rs.10 million and pocketed Rs.170 million.

Given that the usual rules are not working, filmmakers are turning to lesser-explored genres. And children's films are no longer seen as risky.

Sketching the character of today's teenagers is turning out to be quite a challenge for Bollywood's writers. Most children today are 'young adults' as Zain Khan is portrayed in 'Chain Kulii Ki Main Kulii'.

Also, these young adults are capable of being the core of big-budget movies just like Sana Saeed, who brought screen father Shah Rukh Khan together with his batch mate Kajol in 'Kuch Kuch Hota Hai'.

In fact, Hansika Motwani, who debuted as a child actor in 'Koi... Mil Gaya', has gone on to play an adult even though she is just in her early teens. She played the love interest of Himesh Reshammiya in the just-released 'Aap Ka Surroor'. 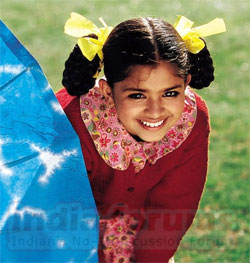 'Children today are far more mature, at least in the metropolis and emerging cities. With no-holds-barred exposure to foreign films and cyber world, any film that features children cannot be passed off as a children's film,' said Vishal Bhardwaj.

Here is hoping that Bollywood scriptwriters rise to the challenge of scripting films that can engage this very fickle category of viewers, else 'Taare Zameen Par' may remain a one-off.

With some child artistes surpassing established grown-ups in terms of acting prowess, their remuneration is getting fatter.

Amit Arora, who scouts for child models, says, 'If a child is much in demand, he even gets 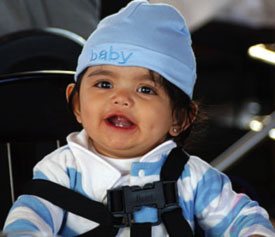 Rs.50,000 to Rs.200,000 every year, subject to a flexible schedule. For instance, he shoots in Delhi and dubs in Mumbai or, say, signs a contract against endorsing a competitive brand.

He says, 'I know many parents who have taken transfer from Delhi to Mumbai only because their child is in great demand in ads and films.'

Actress Sarika, who has now taken up the cudgels against 'child labour in films', is trying to introduce a code of conduct for child actors in Bollywood.

'It is distressing to see children being pushed to enact mentally-traumatic scenes without counselling. In Hollywood, a psychotherapist is always present on the sets to counsel the child before and after the child enacts a traumatic scene.

'In Bollywood, they are 'persuaded' with chocolates! There is no schedule for them, and their education suffers. In Hollywood, there is a rule that only during school vacations can a child act in films,' she says.