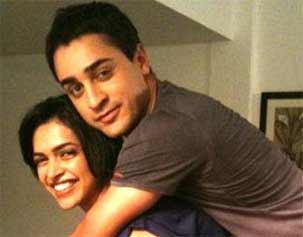 Following a break after "Break Ke Baad", actors Imran Khan and Deepika Padukone will be seen together on the screen again, but this time for an advertisement.

"The duo will be seen together for the first time on the small screen in a sexy new LUX commercial," said a statement.

The ad is likely to be released Dec 1, said a source.

Meanwhile, Deepika is basking in the success of her latest release "Goliyon Ki Raasleela Ram-leela" and Imran is eliciting a positive response to "Gori Tere Pyaar Mein", which released Friday.